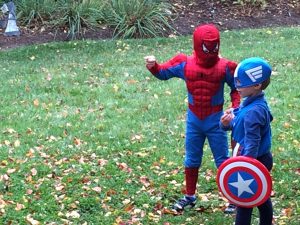 We recently celebrated the 80th anniversary of the first appearance of Superman in Action Comics #1.  The cover date of that classic comic book read June, 1938, but it was actually released on April 18, 1938.  While other adventure heroes of fiction came before, Superman was the first and the original superhero.  As a prototype, Superman’s saga contains all-you-need-to-know about superheroes, including but not limited to: an origin story, a distinct identity (and secret identity), special powers (and vulnerabilities), heroic mission, heraldic colors, personal branding accessories, inspiring mottos, and a cast of supporting characters.

Superman has endured because his story resonates with all of our stories.  For starters, everyone in the U.S. has an immigrant story to tell.  Granted, we are not all gifted with genes that grant us mythological might, but metaphorically speaking, we all carry DNA capable of miraculous evolutionary manifestations. We all have an “origin story”, a back story of the person we used to be, hinged on fateful transformative experiences that change us forever.  We are all on a hero’s journey that continually shapes us as we shape the world around us, and we all must choose how to use our gifts and when to make sacrifices.

Origin stories apply best to children, because all children are superheroes, with distinct identities, special powers, and heroic missions.  Like all heroes, children make sacrifices- they systematically sacrifice pieces of their childhood in the service of maturing into capable and independent adults.  Each developmental leap of childhood, “like leaping a tall building with a single bound”, has a cost.  Children will grow and develop, whether they (or their parents) are ready or not. 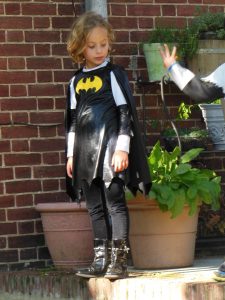 The generative value of effective parenting is woven into the Superman saga.  Kal-El’s birth parents dedicated themselves to saving his life and ensuring his survival when all else was hopeless for them, and his adoptive parents helped transform Clark into a superhero by instilling a sense of personal responsibility while honoring the value of fair play and honest hard work.  Martha and John Kent were the original Superparents.  Like classical superhero parents that followed, the Martha and John Kent were painted as older, grandparent figures compared to Kal-Els biological parents.  The Kents were portrayed as tender-hearted in an era when academic parenting experts still argued the value of strict parenting over lax parenting, 10 years before Dr. Spock espoused patience and a “wait and see” posture.  The Kents were shown to be thoughtful and considerate but decisive in parental decision-making, decades before the value of “authoritative” parenting was asserted.  Moreover, Martha and John Kent knew how to adjust their parenting style to “fit” Clark’s unique strengths and weaknesses.

In my mental health practice, one of my favorite things with children and parents is when I get to combine parenting with what I know about superheroes.  The Superman saga is a sound platform for discussing parenting and parenting styles.  What is your child’s identity?  What is your parenting identity? Does your parenting style fit your child’s style?  If there is a poor fit in style between you and your child, do you know how to adapt your parenting?  Do you know how to play to your child’s abilities while supporting their vulnerabilities?  Do you know how to increase the frequency of desirable behavior and decrease the frequency of undesirable behaviors?  These discussions are never simple, but often illuminating.  I believe that every parent has the power to be Martha and John Kent or even Bob and Helen Parr (a/k/a Mr. Incredible and Elasta-Girl).  I believe every child is capable of becoming “super” in their own way.  That is why my office is covered in and visited by superheroes every day.

ICYMI:  SUPERMAN’S ORIGIN: Identity: Scientists Jor-El and Layla of the planet Krypton sent their only son, the infant Kal-El, to Earth in a rocket ship to avoid the imminent planetary catastrophe that claimed Krypton. John and Martha Kent of Kansas discovered the spaceship and became Kal-El’s adoptive parents.  They raised “Clark Kent” as their own, consistent with the old-fashioned values of WWII-era Middle America.  The adult Clark Kent has often been portrayed as bumbling and lacking in confidence.  The superhero Superman appears to be the core identity while the meek Clark Kent is the disguise. Powers: Through the wonder of science fiction, Kal-El’s Kryptonian physiology gave him superpowers (e.g. super strength, nigh invulnerability, the ability to fly, etc.) when exposed to the radiation of Earth’s sun.  Mission: As a “champion of the oppressed”, Superman’s original comic book mission was “to devote his existence to helping those in need”, and his popular motto was later updated “to fight for truth, justice, and the American way” in the first Superman radio show.  Superman’s costume is loaded with symbolism- the primary colors are the very colors of super heroism, the cape was crafted from the baby blanket that accompanied Kal-El in the spaceship, and his iconic chest emblem is the El family crest depicted on the blankie.